Law Of Attraction – The Beautiful Beaches Of Rio De Janeiro 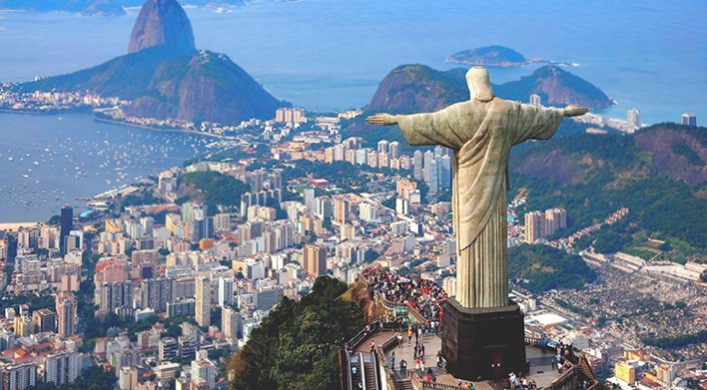 Rio de Janeiro is one of the world’s first class seaside cities. It is on the Atlantic Ocean, on the east side of the continent of South America, and at the mouth of the Guanabara River (Rio).

It was discovered in January of 1565 by the Portuguese, and today has a population of about 7 million.

The original native people were the Tupi, and they referred to the white Portuguese newcomers as the Carioca people, which meant, “the houses of whites”.

You don’t have to be born in Rio to be a Carioca.

If you can learn to relax in the city’s lifestyle, where there seems to be no concept of time, that will help you become accepted by the locals.

Try and relax, and go with the flow of this amazing culture.Cariocas are very friendly, and they like to talk with strangers. If someone says to you, “I will see you later”, that is just a nice way of saying, “good-bye”.

Rio is one of the most visited cities in the southern hemisphere, and is known for its natural beauty.

People come from all over the world to experience its carnivals, dances, landscapes, and especially its beaches.

The Copacabana Beach and Ipanema Beach are the most famous beaches in Rio.

If you begin at the “downtown” area of Rio, the oldest and first beach is Flamengo and then Botafogo Beach.

Sugar Loaf mountain is next, and stands almost 1300 feet above the harbour.

It is a popular tourist stop because it allows you to have a panoramic view of all of Rio’s beaches.

Take time to travel the cable car to its summit.

As you travel south along the Atlantic coast, you will meet Leme Beach, Copacabana Beach, Ipanema Beach, Leblon Beach, and finally Barra Beach, at the farthest point from the city centre.

Rio was host to the 2016 Summer Olympic Games and the Summer Paralympic Games in August of that year, and even the ZIKA mosquito virus could not stand in her way.

In the past, Rio’s Maracana Stadium, one of the world’s largest football stadiums, hosted the finals in soccer in 1950 and 2014 for the FIFA World Cup.

In 2013 again, Rio hosted the FIFA Confederation Cup. Soccer is loved by millions all over the world, especially here in South America.

The XV Pan American Games, with its spectacular opening and closing ceremonies, and World Youth Day in 2013 at Copacabana Beach wowed the world once again!

Perhaps no other sport is more closely associated with Rio de Janeiro than beach volleyball, which has been in the Olympic Games since Atlanta 1996.

The men’s and women’s competitions took centre stage on the famous sands of Copacabana beach.

“Christ the Redeemer” is a colossal 98 feet tall Art Deco statue of Jesus Christ, standing on top of Corcovado mountain in the Tijuca Forest National Park, overlooking the city of Rio.

Ride the cable car to the top, and enjoy the musicians on board courting your journey.

This symbol of Christianity will present to you the best view of Rio’s beaches. It would probably be the best way to begin the Rio beach experience.

In the 1950’s, the casinos, hotels, and nightclubs along this beach, made the beach world famous.

Thousands of visitors from all parts of the planet, continue to love this beach. Some even call it home for the entire winter.

This wide scalloped beach is about 4 km (2.5miles) long, and there is a lifeguard post every kilometre. (postos 2 -6)

Watch for the favela kids showing off their soccer skills, and beach vendors shouting out their wares. They sell it all!

The area between the Copacabana Hotel and the Rua Fernando Mendes, is the gay and transvestite section, known as the Stock Market. The rainbow flag will lead you there.

Carioca retirees, and favela kids stake claim to posts 5 and 6.

If you walk to the end as far as the fort, you will be in the fishermen’s colony. As the Copacabana Beach begins to curve to the north, the sands quiet down, and older Leme residents and kids occupy this space. Princess Isabella Ave. divides these two neighbourhoods.

Even though the beach is lit at night, and there are police around, it might be a good idea to proceed with caution. As well, on the weekends, when the shops and kiosks are closed, this is a time for the “Copa” to sleep.

As thousands wake to view the sun rise over the Atlantic Ocean, the beach city of Copacabana has already started to live life to the fullest.

Fishermen are pullingin their nets, and senior citizens are going for their daily walks and morning dips. Fresh baked bread is ready for sale at dozens of bakeries, and the night people are heading home for some rest.

Copacabana is high on life.You might want to experience the New Year’s Eve party here, that attracts over 2 million people every year from all over the world.

Consider yourself in “Little Paris”. Ipanema Beach is the 2nd most expensive neighbourhood in Rio, with lots of excitement on the beach.

The avant garde galleries, bookstores, and movie theatres await you. The H. Stern jewelry store has many precious stones that will dazzle you. Take their free museum tour. You might not buy any precious stones, but you will at least leave with a gift.

Ipanema’s Sunday market is known as the “Hippie Fair”. Everything is very costly, but interesting. Take home a parrot or a wooden doll.

Maybe you would rather take a stroll down Garcia D’Avila Street, and window shop after playing and enjoying the sights and sounds on Ipanema’s beautiful beach.

If you want to stay awhile and be close to the action, the Fasano Hotel and the Ipanema Plaza Hotel are close to the sand and shopping. You might have to share a room with Madonna, Beyonce, or John Travolta.

If your budget doesn’t allow you to stay at Hotel Caesar Park on the beach, investigate “The Adventure Hostel” on Vinicius Street.

Just as the Copacabana sand strip is divided into Tribes, so is Ipanema. If you park your blanket and umbrella on Ipanema Beach in front of the country club, you will meet the aristocracy.

You are now in the land of money people.They are all beautiful and worth photographing. Don’t forget your camera.You will be glad you have it with you.

As you move toward Post 9, the alternative crowd will appear. Be prepared for anything and everything here. This beach tribe is very relaxed and laid back.

You are getting closer to Leblon Beach, and the most expensive neighbourhood in the Americas – Leblon. The Leblon beach area is quiet, and seems deserted compared to Ipanema’s beach.

This beach could be dangerous for visitors, because of the lack of people on it.If you wish to move into the Leblon core, and visit the shops and restaurants, you won’t be disappointed.

We want to talk about just one more beach, known as Barra Beach, which is located in the south. Its full name is Barra da Tijuca. You can take a taxi or bus from Zona Sul, and be there in 25 minutes.

It’s a fair sized beach, and it’s perfect for kite surfers, soccer stars, and very few tourists. There is affordable rental gear available, and it’s the perfect destination to go to learn to surf.

If you want “trendy”, choose the clean and calm Ipanema Beach.

If you want “local”, choose Copacabana Beach, and watch the Carioca play capoeira, and much much more!

The athletes will be waiting for you at Leblon, playing volleyball, football, skating, and surfing. They found a place to exercise and tan at the same time.

Barra beach is the perfect beach to learn the art of surfing, and there will be nobody there to laugh at you.