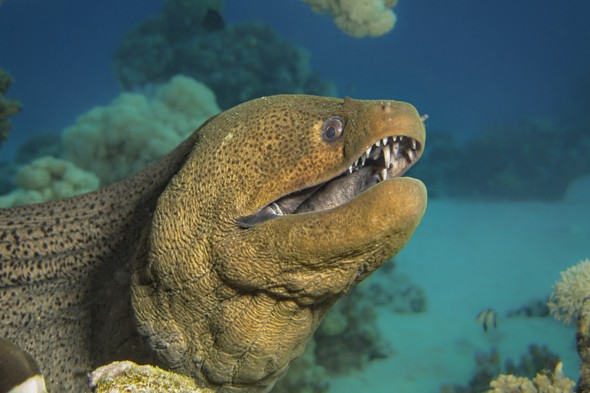 It is a common misconception that they are the same as water snakes, or the ocean’s equivalent of snakes we have on dry land.

Eels are actually elongated fish. They have very long bodies that wiggle through the water. The eel will send waves through its body, which propels it forward in movement. Even cooler is they can go backwards by reversing the wave!

We are just fascinated by everything living in the ocean. In fact, a high school teacher recently conducted a survey of his students, asking which they found scarier: outer space or the ocean. Since both are rather unknown territory to humans, or are at least inhospitable.

Can you guess the result? The result was that exponentially more students feared space than the ocean. This is largely because, despite not being able to live in the ocean, we can at least send divers, scientists, marine biologists and archaeologists into the water to discover new species and see what’s down there.

Space is scary because we cannot really visit or explore. Space is open and unending: the ocean has walls and a floor. Space is an unknown unknown, while the ocean is a known unknown.

It’s amazing how there are so many different species on this planet, some who live at very high altitudes and some who live deep within the dark ocean. It’s fascinating to observe how each of these creatures has evolved to survive perfectly within their respective ecosystems.

There are many, many different species of eel living in the ocean. And by “many” we mean 800. Most are predators, all evolving from larvae.

In order to understand this creature, we must first understand its physiology.

Eels have long been one of the most mysterious and misunderstood creatures on the planet. It was only in the late 1800s and early 1900s that they were studied and finally understood.

Because eels are nocturnal and hide most of the time, they are hard to see and difficult to track.

In the 1880s a French zoologist kept larval eels in a lab tank and watched them mature to glass eels and then fully develop into adult eels. Until then, it was widely believed that these larvae were an entirely different species.

Then in the early 1900s Johannes Schmidt conducted research in the Atlantic Ocean and Mediterranean Sea, observing that all the larvae looked familiar and must, therefore, have come from a similar species.

Eels range from 2 inches long to 13 feet long, weighing anywhere from 1.1 ounces to 55 pounds. The European conger is the largest, measuring 10 feet in length and weighing up to 240 pounds. Can you believe that? They’re bigger than most men.

They are some other species that can be longer – like we said, up to 13 feet – but they weigh far less because of their body shape. These eels are much more slender, like the slender giant moray.

Their fins are fused together to form one long ribbon-like fin that goes along most of their bodies. This is their dorsal fin, which most fish possess.

Fish with bones, that is. It is a singular fin found on the spine or centre of the back. On sharks and dolphins it is the famous triangular shape that sticks out of the water. On eels, it is nearly as long as their bodies and rather shallow.

The purpose of the dorsal fin is to stabilize the fish. Other fish use the dorsal fin to propel them forward to stop from rolling, as well as to help with agility.

Their scales are so tiny that they look naked and slimy, but don’t be fooled! They do have scales.

Here is a great documentary about eels if you’re interested – Eels are very important in their ecosystem. They serve as one of the top freshwater predators, particularly in streams, and help to keep other population numbers under control.

They, in turn, are eaten by seabirds, large fish and people. Carnivorous fish such as the barracuda, other animals like the otter or even storks have been seen eating eels.

We mentioned there were 800 species of eel. As such, you can imagine the vast range of size and defence mechanisms across the different species of eel.

Each creature on this planet has its perfect place in the ecosystem, helping to regulate and maintain population numbers.

One of the most important things you’ll learn is that the food chain is actually a circle, rather than a linear line or linear process. Everything eats something slightly smaller than itself.

The moray eel, for example, being the largest at 13 feet long, is eaten only by large fish like the barracuda or sharks (and humans). They do not have a specific type of fish they eat: most are opportunistic carnivores, eating whatever crosses their path or is easy to catch.

They are burrowing animals, meaning they dig themselves down into the dirt (in this case: sand or among rocks). Many are nocturnal so, in addition to their burrowing habits, they are not seen very often.

When they are seen, you may find them living together in holes known as eel pits.

Eels begin as eggs. They are born as larvae, drifting near the surface and eating particles that float in the water. Eel larvae are very cool to look at. They are transparent and flat.

The larvae then change into glass eels, translucent little worms no bigger than your pinky. Glass eels then become what are called elvers.

Freshwater eels spawn in the ocean and live upstream as glass eels. This is where they develop pigmentation, eating worms, insects and crustaceans. It can take 10-14 years for them to mature.

Adults swim 3700 miles (6000 kilometres) to the spawning grounds. During this time, they rely on stored energy, their eyes enlarge and change pigment as they adapt to dim, blue ocean light, and the sides of their bodies turn silver. They swim in schools and when they are silver altogether it is very difficult for predators to see them.

The American eel, for example, can lay anywhere from 500 000 eggs to 4 000 000. These eggs will either become eels or be eaten by other carnivores in the water.

We mentioned there are about 800 eel species on the planet today. While we won’t dare get into naming each single one of them, we will give you an example of the families of eels (20 total):

We like our delicacies, don’t we, us humans? We don’t care if the oceans will die in less than 50 years; we want our delicious sushi. Freshwater eels are used in Japanese dishes.

You will likely have seen them on a sushi menu as unagi, the Japanese word for freshwater eel. They are considered a luxury and cost a lot of money.

In fact, Japan alone eats more than 70% of eels caught. They are also eaten in China and Hong Kong, costing nearly $130 per kilogram, and once cost five times this amount.

In Europe they eat the European eel, again, not caring that it’s endangered.  The United Kingdom just loves eating eel: commonly they used to eat jellied eel, but not so much since the 1940s.

They also used to feast on fried elvers, but since the 1990s, and the drastic decline of this species, elvers are still eaten but are extremely expensive.

An attempt at sustainability

It may comfort you to know that Greenpeace International has been keeping an eye on commercial fishing and they have a red list for animals that are endangered.

Since the 1980s, scientists have seen a very drastic drop in glass eel populations.

They are considered a delicacy in many parts of the world,  and the price keeps going up and up as they become harder to find. They are also at risk of destruction by parasite.

There is not much known about eels, considering how much they have influenced coastal cuisines and ecosystems. It is crazy to think that we have only really begun to learn about them in the last century.

Hopefully we can continue to study and understand them and their ecosystems, and reduce our consumption, before it is too late.